Atlantic City was severely challenged by Superstorm Sandy in late October 2012, as the powerful storm system approached the southeastern U.S. and made landfall along the New Jersey coast. Approximately 8.5 million people lost electric service, and several New Jersey cities and towns were devastated. Property damage was estimated to be over $70 billion in areas of the U.S. affected by the storm.

Superstorm Sandy tested Atlantic City’s ability to continue to provide critical health care services, offer public shelter of any significant consequence and maintain essential police and fire services during and – perhaps more importantly – after the weather event for an extended period of time. Despite a mandatory evacuation order, approximately 20,000 largely low-and moderate-income families lacking transportation sheltered in place and then struggled for more than a week with flooding and lack of access to services.

The urban city of Atlantic City is vulnerably situated on a narrow barrier island with no on-island utility electric generation resources. All electric power resources serving the city rely solely on a radial utility subtransmission circuit system connecting the island remotely from the mainland electric transmission grid system. In recent years, however, efforts have been underway to increase the reliability and resilience of the local energy infrastructure. DCO Energy is planning to add a microgrid to its Atlantic City district energy system, the Midtown Thermal Control Center. The project will ensure that connected customers have uninterrupted power should another major emergency cause a grid outage. DCO Energy has been working with the city, local utility and state board of public utilities to develop the concept. 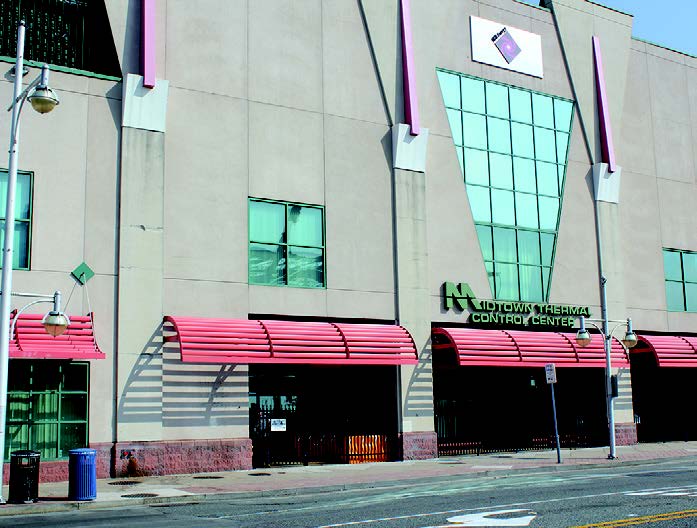 The Midtown Thermal Control Center (MTCC) was built in 1996 as a district energy plant to supply steam and chilled water to several facilities in the midtown area of Atlantic City. Today, MTCC is co-owned by DCO Energy and Basalt Infrastructure Partners. Customers include Bally's, Caesars and Wild, Wild West casino-hotels; The Claridge hotel; the Pier Shops; and historic Boardwalk Hall. In addition, the system is in the process of adding the existing AtlantiCare Regional Medical Center to take steam, chilled water and electric from the MTCC cogen facility, as well as the new AtlantiCare Medical Arts Pavilion to use steam and electric. The system’s 4-mile-long thermal distribution network runs along and in dedicated rights of way within the city and has functioned flawlessly into its third decade of operation.

In 2012, a combined heat and power plant was installed at MTCC, featuring a dual-fuel combustion gas turbine (5.4 MW) and a heat recovery steam generator with supplemental gas firing to provide up to 66,000 lb/hr of steam capacity. The electric power generated is used in-house at the plant, and any excess power is currently exported to the grid. Fortunately, later in 2012, when Superstorm Sandy impacted the island, the new CHP system stayed on line during the entire storm. The MTCC has a total steam capacity of 285,356 lb/hr (inclusive of boilers and heat recovery steam generator) and a chilled-water capacity of 16,287 tons.

Plans to shore up Atlantic City’s energy infrastructure have received the support of state programs in recent years. In 2015, New Jersey updated its Energy Master Plan, establishing a new overarching goal to "improve energy infrastructure resiliency and emergency preparedness and response" after several extreme weather events had left many people and businesses without power. The policy recommendations were aimed at increasing the use of micrgrid technologies and applications for distributed energy resources to improve grid reliability and resilience in future major storms.

As a first step toward achieving this goal, the New Jersey Board of Public Utilities (NJBPU) initiated the Town Center Distributed Energy Resources (TC DER) Microgrid program. It includes measures to help New Jersey become more resilient, particularly with respect to critical facilities. For the purposes of this program, a TC DER microgrid is defined as a cluster of critical facilities within a municipal boundary that may also operate as shelter for the public during and after an emergency event or provide services that are essential to function during and after an emergency situation. These critical facilities are to be connected to a single or a series of distributed energy resources that can operate while isolated from the main grid due to a power outage.

After the announcement of the TC DER program, DCO Energy approached the city of Atlantic City about the possibility of creating a microgrid together – given the company’s existing district energy system in Midtown and its very positive long-term relationship with the city.

The TC DER Microgrid program has established incentives to encourage local and state governments to develop microgrids in their jurisdictions. The Phase I incentive program incentivized feasibility studies. Applicants were limited to local government entities or state agencies that own or manage critical facilities. DCO Energy worked with the city on its application for this incentive.

The NJBPU evaluated 13 applications for Phase I incentives. All 13, including the Atlantic City microgrid project, received a combined $2 million in feasibility study grants. The applicants were also informed that they would be eligible to apply for a Phase II incentive that would provide funding, on a competitive basis, for the design of their TC DER microgrids. The Phase II incentive program required at least a 30 percent completed design and was intended to help move projects toward further development and construction.

In March 2021, under an NJBPU order, the Atlantic City microgrid project received a $1.125 million grant from the Phase II incentive program. The incentive is designed to promote the use of renewable distributed energy resources and clean energy technologies such as energy storage and electric vehicle charging. This incentive also aims to promote microgrid services to facilities designated by the Federal Emergency Management Agency (FEMA) as Category III and Category IV (in terms of the consequences and risks to building occupants in the event of a building failure). Applying microgrid projects were required to serve at least two such facilities. Among the customers of the proposed Atlantic City microgrid, the AtlantiCare Regional Medical Center City Campus meets the FEMA Category IV classification as an inpatient health facility, and Boardwalk Hall meets the Category III classification as a public shelter. Many of the hotels that would be served by the microgrid are not classified by FEMA but likely exceed its Category III classification.

At an NJBPU meeting announcing the Phase II awards, Joseph Fiordaliso, NJBPU president, acknowledged the importance of microgrids in serving these essential and other connected facilities. He remarked, “As the recent events in Texas have reminded us, infrastructure resilience is critical to maintaining reliable energy and utility services in the event of an emergency.”

The city of Atlantic City microgrid project was one of eight to be awarded this Phase II incentive. The grant it received was also the largest awarded – equivalent to 28 percent of the available funding under this incentive. Besides considering the number and type of FEMA Category III and IV critical facilities served, the award was based on how the microgrid will support the community during a grid outage, the readiness of the project to proceed from design to development and construction, the degree of resilience the microgrid would offer, the clean energy technologies to be incorporated and the approach to reducing peak electric demand and greenhouse gas emissions.

On receipt of the award, Atlantic City Mayor Marty Small Sr. noted, “We are currently investing more than $100 million in making Atlantic City one of the most resilient cities in the state, and now we are close to having one of the largest microgrids in New Jersey.”

The Atlantic City microgrid will utilize existing in-city resources to maximize value. According to DCO Energy’s best knowledge, nothing of this scale and scope exists anywhere to support critical energy services to an urban community during periods of weather and other emergencies.

The project will leverage the existing thermal resources at the MTCC, with the installation of a gas turbine generation resource – creating a 20 MW CHP microgrid to provide additional energy-efficient electricity, heating and cooling to participating customers (fig. 1). When the microgrid is complete, the project will add up to 150,000 lb/hr of new steam capacity based at MTCC; and while the project doesn’t intend to add chilled-water production capacity, it will replace aging electric chillers with highly efficient chillers using waste heat from the electric generation.

residency and food services during an extended grid outage, the microgrid will provide resilient, conditioned spaces to shelter area residents, health care workers and Atlantic City emergency personnel during and after emergency situations. 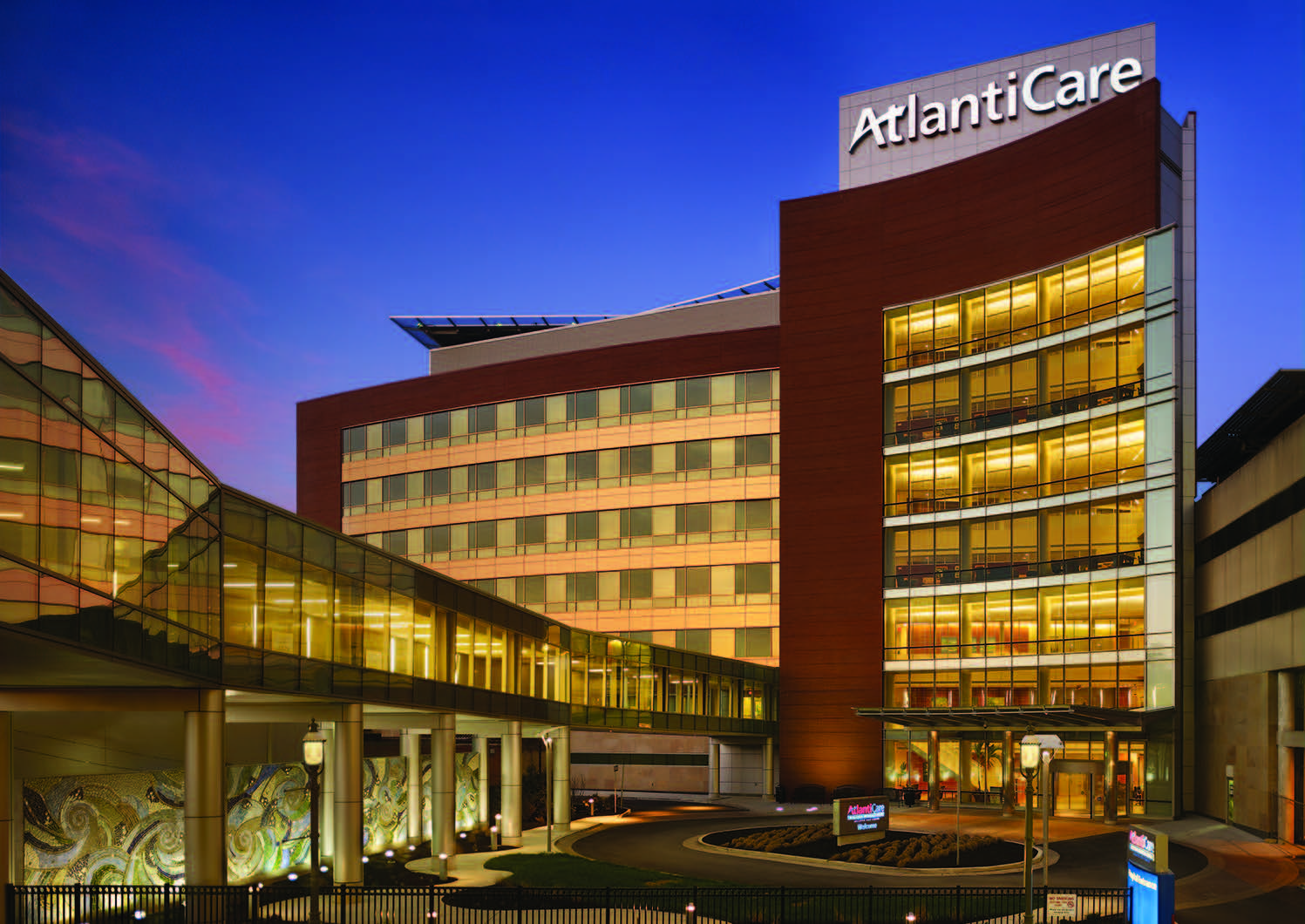 Among the facilities served by the new microgrid will be the AtlantiCare Regional Medical Center Atlantic City Campus and its new Medical Arts Pavilion, anticipated to open in late 2022 across the street from the hospital. According to James Kilmer, vice president and chief administrative officer, AtlantiCare Regional Medical Center Atlantic City Campus, and leader, AtlantiCare’s system Emergency Preparedness Team: “The delivery of steam, chilled water and electricity will ensure we continue to have a resilient, reliable, efficient and cost-effective energy source as we care for our community. Beyond the care we provide within the walls of our facilities, being part of the Atlantic City microgrid is another way for AtlantiCare to contribute to the overall well-being of the Atlantic City community.”

The project will deliver many benefits to the city of Atlantic City, residents and utility ratepayers, and district energy system customers:

Resiliency and redundancy – The microgrid will have capacity to serve the peak electric requirements of customers on the microgrid. It will have islanding as well as blackstart capabilities, allowing it to function if utility power is not available.

Emissions reductions – The microgrid is estimated to reduce greenhouse gas emissions by 76,034 tons per year (41 percent) based on avoided emissions for electric generation, boilers and use of CHP.

Atlantic City Electric load reduction – Converting the existing electric chillers at MTCC to steam-driven chillers will displace the electricity currently consumed by electric chillers, approximately 25 million kWh. This will have a significant impact on energy efficiency and peak load in this region.

Support for clean energy – It is anticipated that electric vehicle charging stations will be incorporated into the Atlantic City microgrid design – for public use and, potentially, for use by electric-converted public passenger vans operated by the Atlantic City Jitney Association.

DCO Energy is currently working with the city of Atlantic City, NJBPU and Atlantic City Electric to design and implement the microgrid. Conceptual engineering and the design package have been completed. The next steps are to submit a revised air permit application to the state and a revised plan to the Casino Reinvestment Development Authority for review and approval.

A project feasibility study by Atlantic City Electric and DCO Energy will need to be completed to determine the most cost-effective solution for (1) utilizing the utility’s existing distribution with a new microgrid control system, (2) creating a new private network from the MTCC plant or (3) Atlantic City Electric creating a new microgrid network. Once a clear path is finalized, this will enable both DCO and the utility to move the project toward implementation.

It is anticipated that, with the necessary rate and regulatory changes, the Atlantic City microgrid could be operational in late 2022.